It was the best, and worst, 6 weeks of my life.

Let’s get the worst out of the way first.

How To Survive Minus Your Husband For 6 Weeks

Make his face your wallpaper! 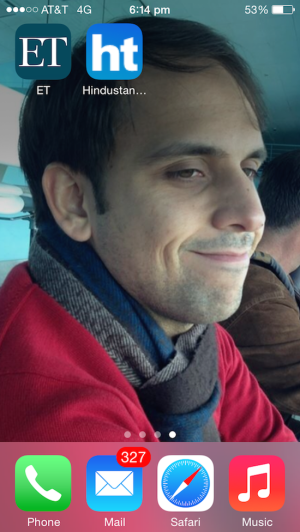 Living away from my husband for 1.5 months felt like the longest 45 days of my life. It was as if time wouldn’t move fast enough. The most we’d stayed away from each other was for a single day, over the course of a year and a half of married life. The first 10 days were the worst. I howled my first week there, wanting to return home the second my flight took off from Delhi. It was a big, huge void. Anyone who has been married long enough knows exactly what feeling I’m talking about. But then on my second Sunday in New York, things changed.

New York was calling out to me to fall in love with it. I tried hard to ignore all the beautiful, unique sights but by the time my second weekend rolled in, I realised – this is it. I don’t know when I will ever get a chance to live in New York again, so let’s make the most of it! 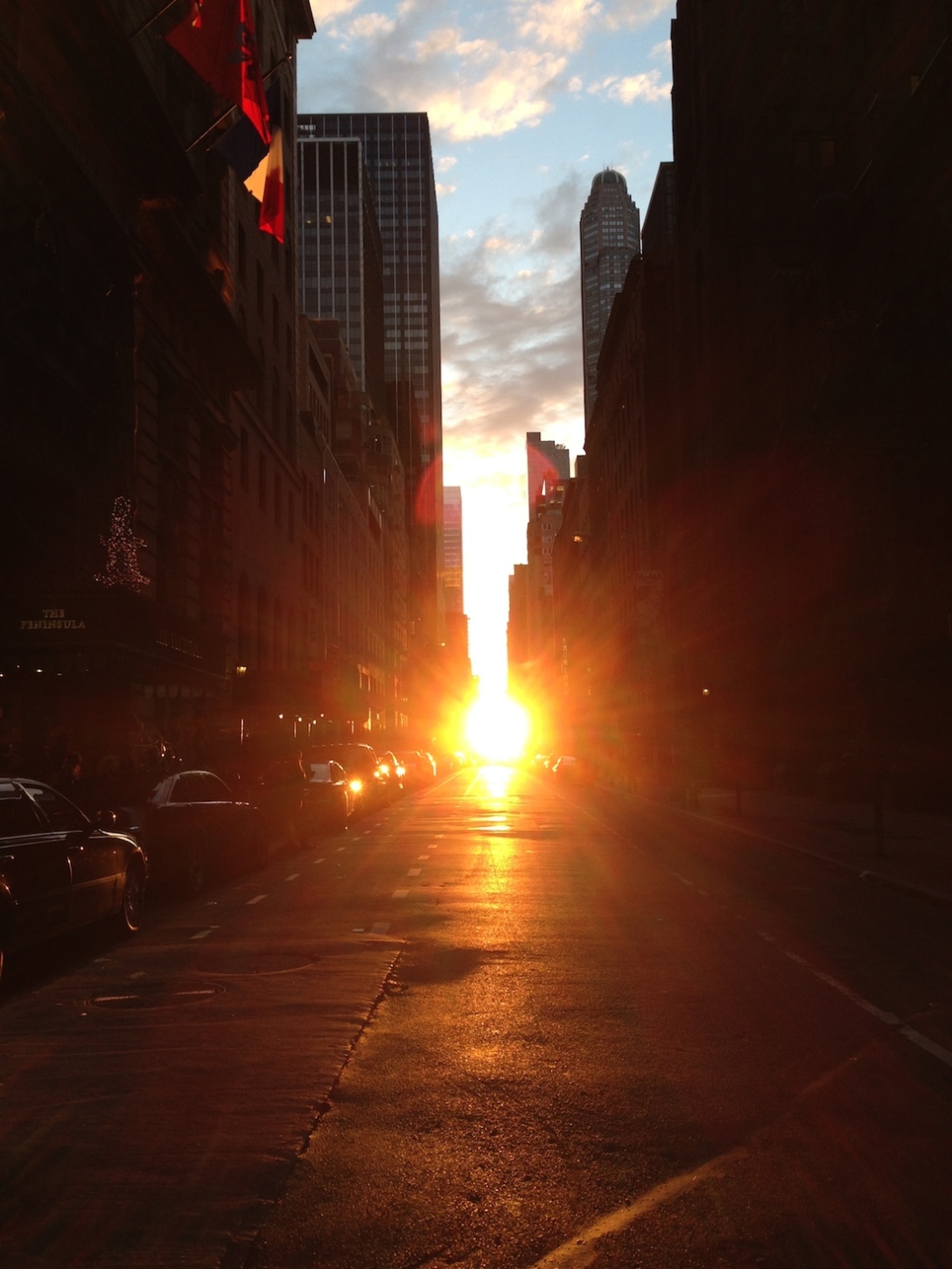 There’s nothing ordinary about this city, not even the way the sun sets in the summer.

You’re on your way to wherever you need to be, and you’re late! But then you hear the beautiful sounds of a piano, and this guy is singing in such a great voice that you have to pause and linger on a moment (or three!) and enjoy the free mini-concert. There’s no escape.

On subway stations, in parks, on streets – people are creating music all over the city. It’s one of the many perks of spending a summer in New York. 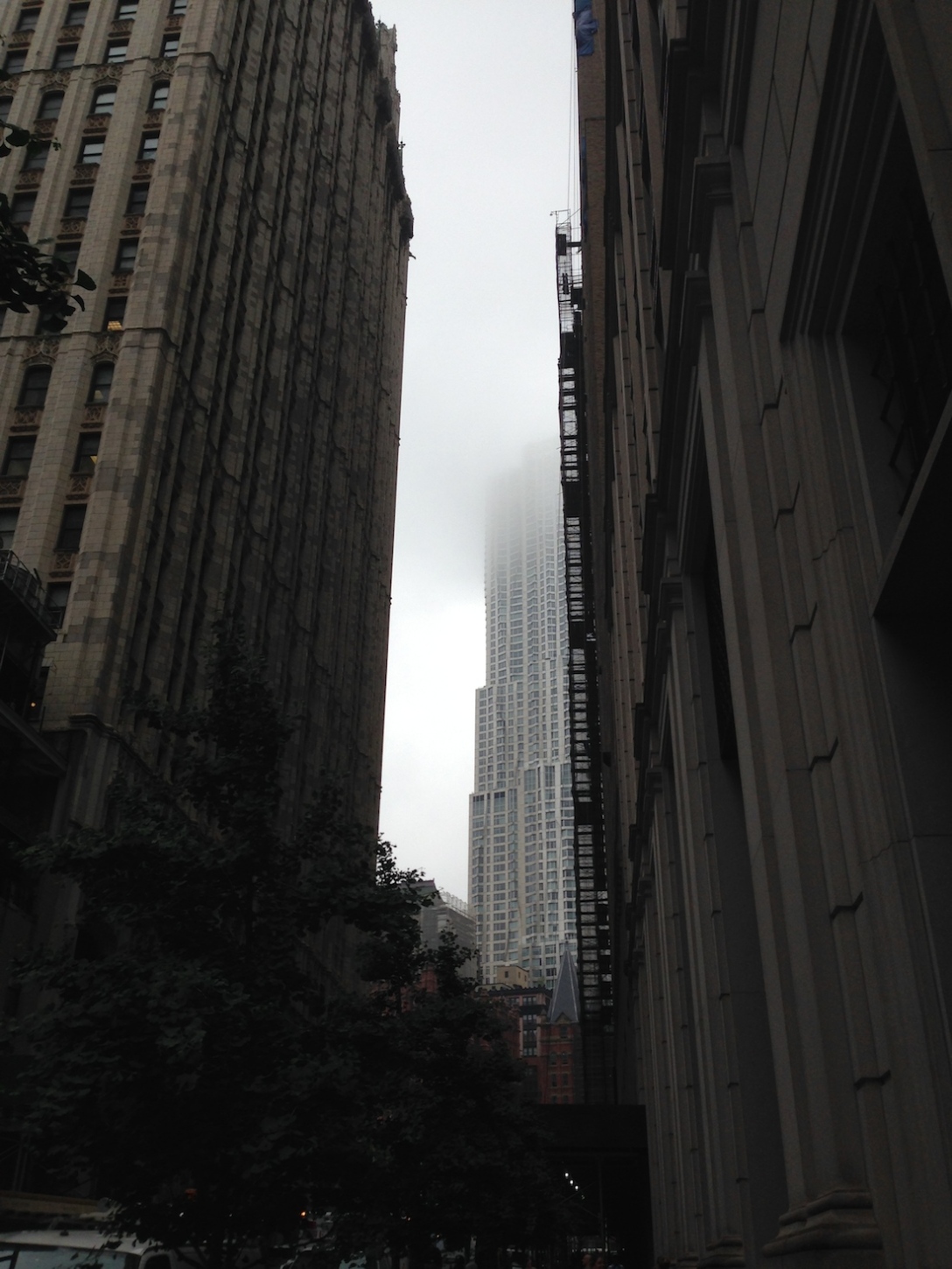 The buildings, literally, seem to touch the sky on a rainy day. 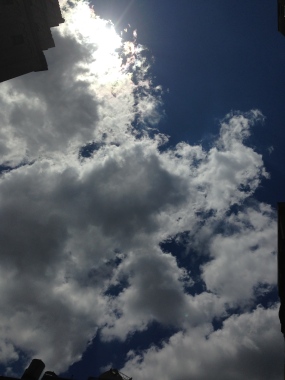 The sky is so God-damn stunning, bright as the brightest blue on a sunny day and scattered with fluffy white cotton on a cloudy day.

These are no ordinary clouds. They’re perfectly picturesque, and make you want to describe them as “fluffy white cotton” instead of just clouds!

While I wish I had a chance to explore more, my course was quite hectic and I was able to visit only a few places. Out of those few, here are my favourites that you shouldn’t miss.

Haha, you know I’m joking, right? Everything made it to my favourites. Here’s basically a list of every place I visited 🙂

#1 Hang out in Washington Square Park

Sun-bathing in a park! 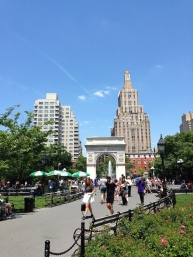 Hanging out with my friends 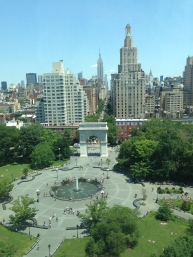 Just a nice park to hang out in. The first time I crossed through Washington Square Park, I saw people sun-bathing and that took me by surprise! Bikins in a park? I thought they were meant just for the beach, or pool? 6 weeks in, I had seen enough of the New York way to be surprised by anything out of the ordinary. WSP is a good place to just go hang out with your friends (as I did with mine on my last day of class).

#2 Spend an afternoon on The High Line

It used to be a rail track to get goods into the city. They’ve left the track intact, and have a bunch of greenery all around. There’s a distant view of the water, and a lot of food and gelato stands around. Just another place to go hangout with your buddies, or in my case, my cousin, on a Sunday afternoon to walk off some of the massive brunch we just ate. Just another “summer spot”, as you’ll find there are many of, in New York. 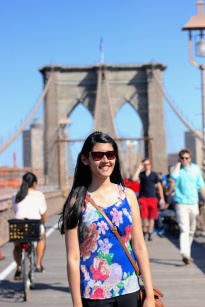 View of Manhattan from Brooklyn Bridge 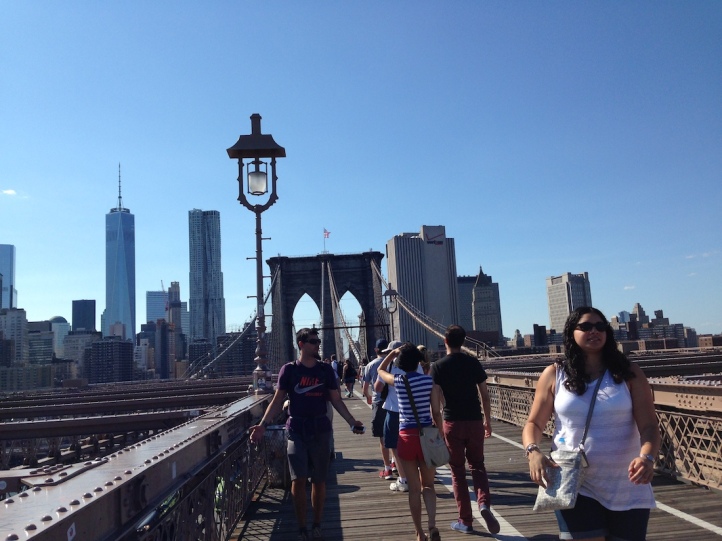 The park right under Brooklyn Bridge

It takes about a half hour, or was it an hour? I barely ever glanced at the time while I was here. There was nowhere I needed to be (except those 8 hours in class), and the last thing I wanted to do was limit how many minutes I spent taking it all in. Just walk across the bridge, get some classic shots of the bridge and of the Manhattan skyline. Enter Brooklyn, go grab a couple of over-priced cupcakes and whoopie pies from a bakery nearby and head over to the park right under the bridge to unwind after all that walking. 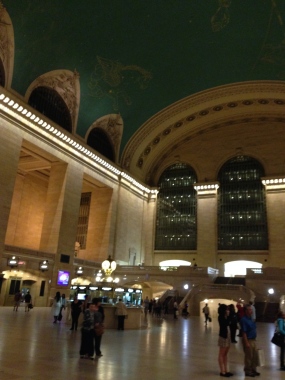 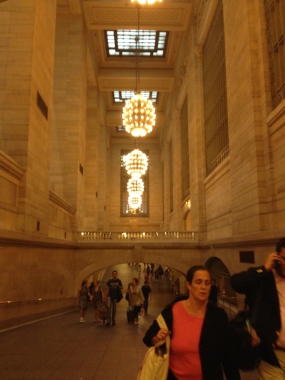 My horrendous photography skills don’t do this station justice. I always imagined it as a dirty, old, crowded station. Turns out – it’s gorgeous, sparkling clean and as the name suggests – GRAND. Just…visit!

With bookshops and food courts – there’s enough for you to do, even if you don’t want to catch a train.

#5 Admire some art at MoMA 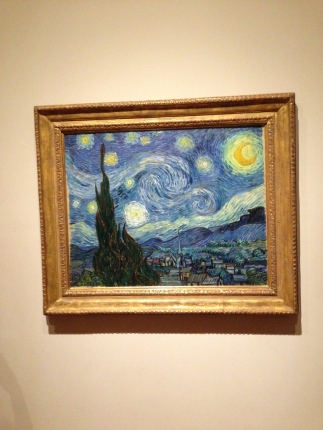 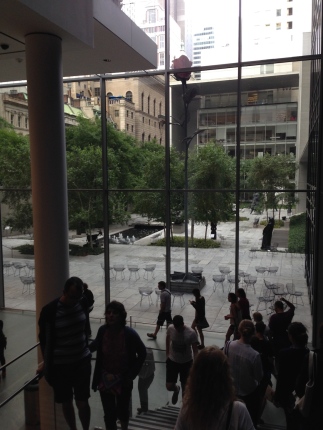 That’s the Museum of Modern Art, for the uninitiated. I mainly went to see Van Gogh’s ultra famous “Starry Night”, because it’s one of those paintings that I loved just because, without knowing who it was painted by and how well-known it was. I know nothing about art, but I still enjoyed the many floors of sometimes beautiful, sometimes odd and sometimes questionable (as in, “you’ve got to be kidding me, this is art?!”) art work. Go on a Friday evening, between 4 to 8 pm, to get free admission thanks to UNIQLO Free Friday Night.

#6 Fall in love at Central Park 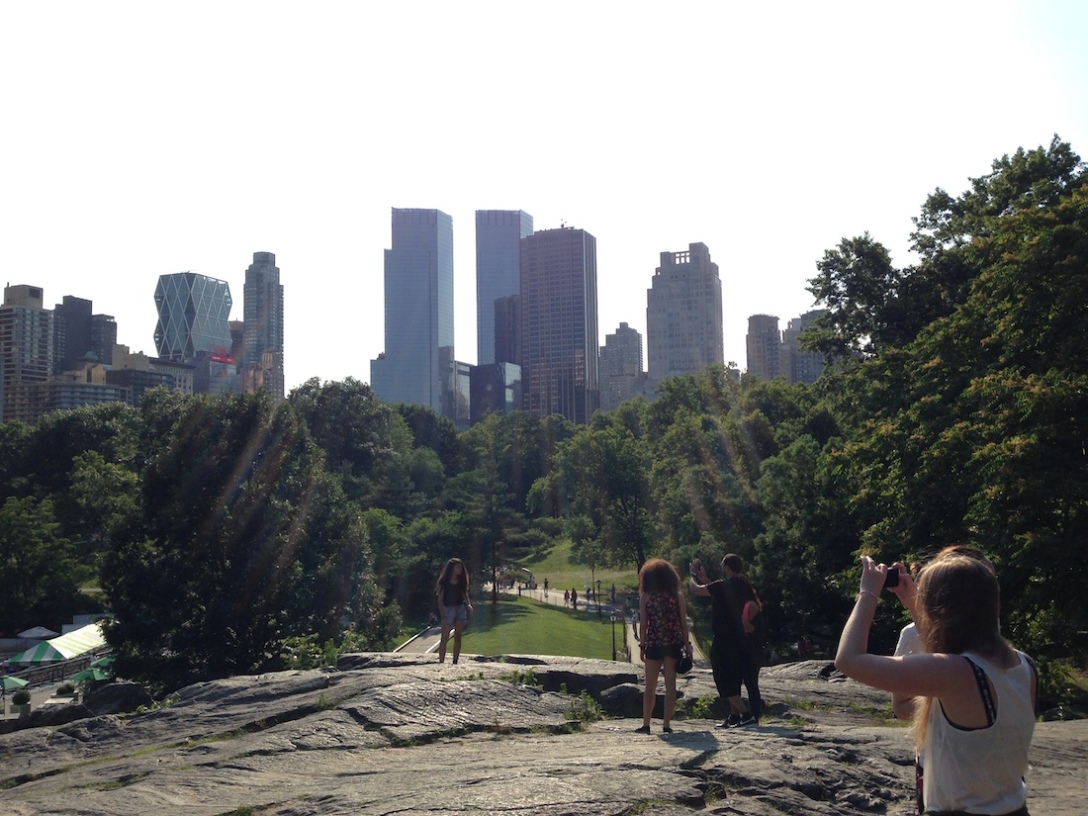 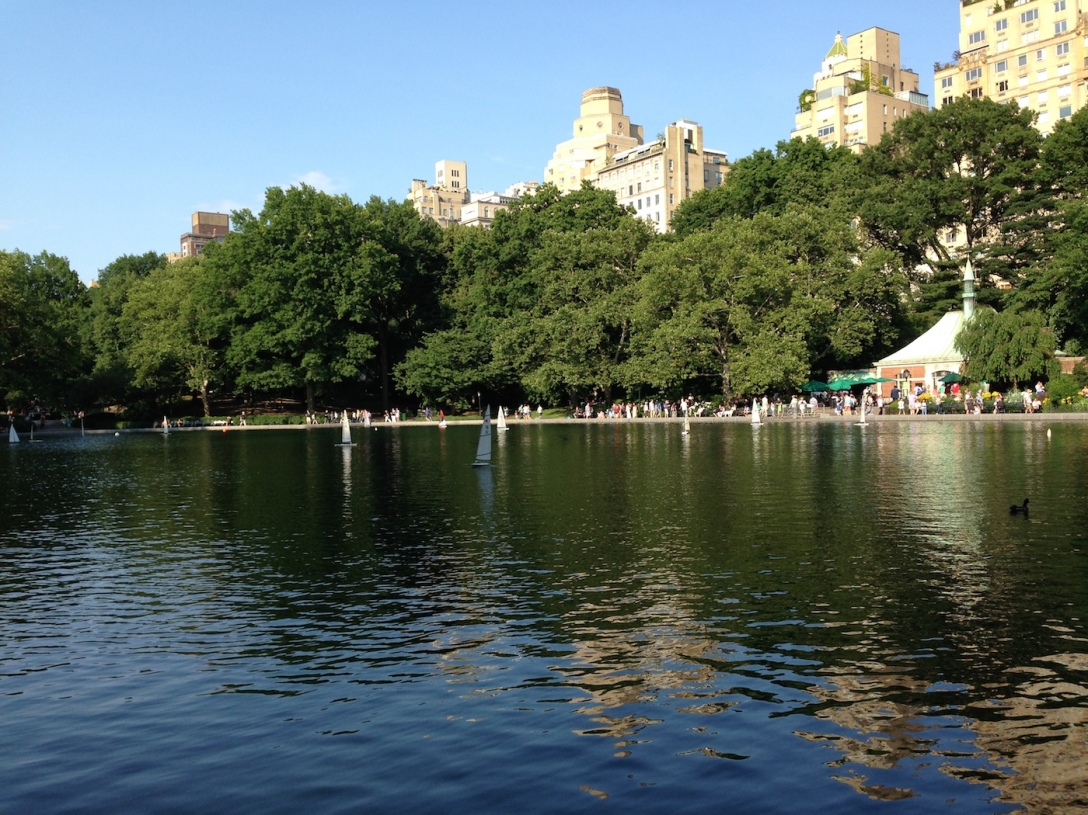 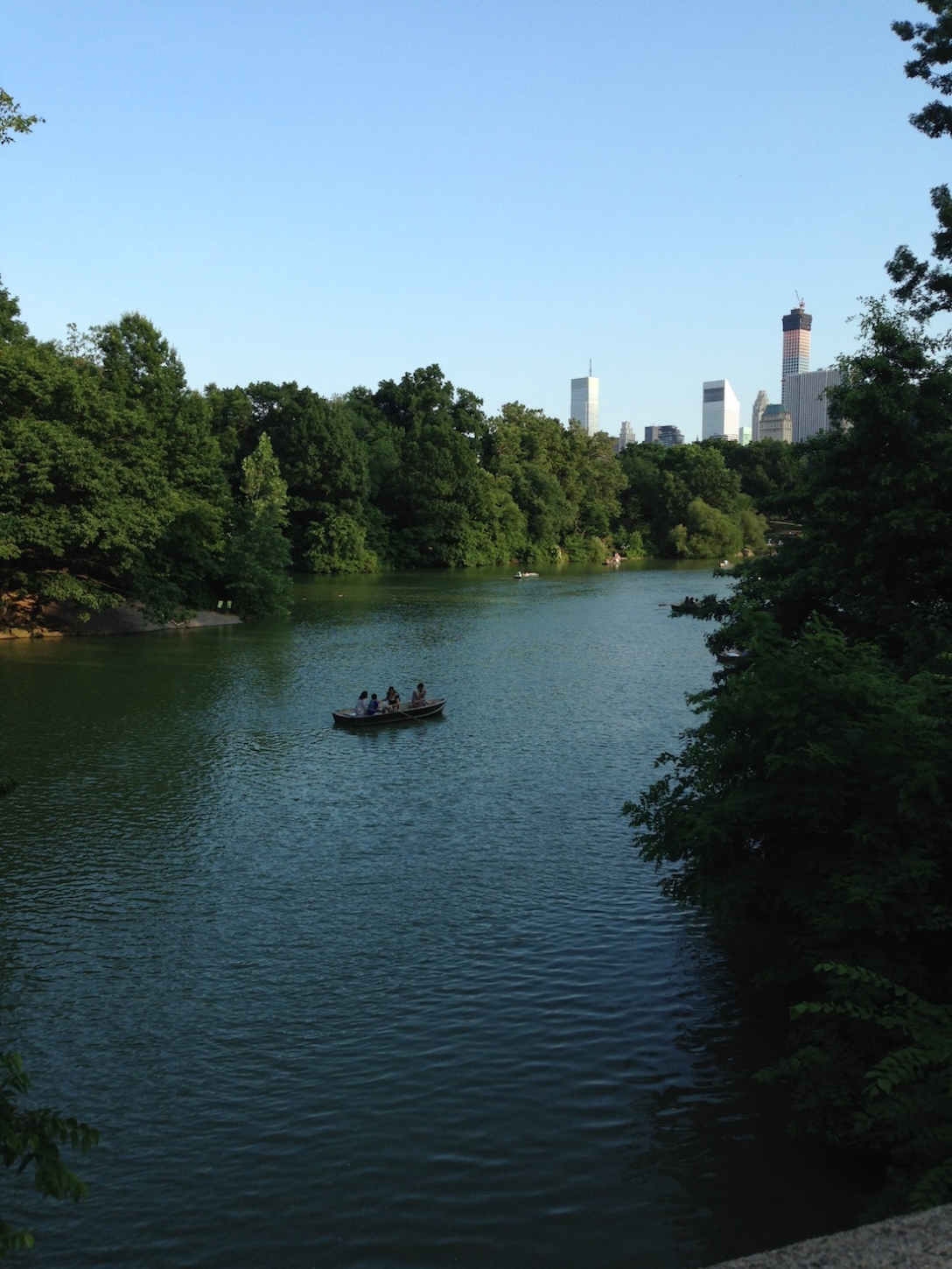 I should’ve gone here every single weekend. I went only on 2! And yet, despite my horrendous photography skills, I got these shots. Can you imagine how perfect the landscape all around me was? I fell in love with Central Park. It was just miles and miles of beauty. Oh, so many miles! It’s massive. You can’t possibly cover the whole thing in a single visit, so visit multiple times! The best part to visit is the main lake reservoir up north (the last picture above). It’s like the Marine Drive of New York. You can just gaze at the water and the sky for hours, endlessly.

#7 Gasp at the Manhattan skyline lit up at night

I was living in Manhattan, and I honestly didn’t know where to go to actually look AT Manhattan, from the outside! Luckily, a friend and his wife, who live in New York, drove me to New Jersey, where we enjoyed this view on a full-moon night. Just type in “Hyatt on the Hudson” on Google Maps, and take a train/ride a car to this spot. It’s the same place where countless Karan Johar movie scenes have been shot. But most importantly, it’s yet another place where you can just gaze endlessly at the water and the sky. Visit during the day, or when it’s dark, it doesn’t matter. The Manhattan skyline is all yours.

I have so much more to share – where to eat, where to stay, my NYU class experience! All coming up in the next post from this mini-series.

Wondering how I landed up in New York? Read “So, I’m going to New York“

Have you been to New York? Did you fall in love too? And if you haven’t been, is it on your wish-list even more now?