If you haven’t read Part 1 yet, you can catch up with it here before you move on to read Part 2.

Day 2 in Australia. My husband and I woke up early to get ready for a day of touring Gold Coast. We threw open the curtains, and what revealed itself was a very pretty view from our room!

We headed downstairs for a big buffet breakfast. I usually order pancakes and generously pour maple syrup on them till they’re soaked. Yes, almost every single morning at almost every hotel in every city in the world. Pancakes are my go to “holiday breakfast”! So after my first (and definitely not last) breakfast of pancakes in Australia, we hopped onto a mini bus and were on our way to Dream World.

Dream World is one of the 3 amusement parks in Gold Coast, and these 3 make up for the main attractions of the city (other than the night life and the beaches, of course). Honestly, neither my husband nor I are big on theme parks, mainly because neither of us has any interest, and by that I mean seriously ZERO interest or inclination, to get onto a roller coaster or any ride that even vaguely results in a stomach-twisting experience. So…yes. The amusement parks were a total waste on us. And if you want to know why we still went to THREE amusement parks on our honeymoon (yes, there were more!), I will have to direct you to my husband as I have not an inkling of an idea. Yes, we’ve already had the big fight while we were planning the honeymoon and the need to visit amusement parks on a honeymoon has already been hotly debated and may or may not have been the main point of contention during said honeymoon fight.

While I had my reservations about going to an amusement park on our honeymoon, I kept an open mind (which is rule #1 of a happy marriage!) and figured it didn’t matter where we went. As long as we were together, we could visit any place on planet Earth and still have fun.

When we arrived, Dream World looked a lot like the foreign version of Essel World, which basically means it looked way cooler (and cleaner!)

We were told there’s a separate entry for International visitors, and the lady who met us there, to give us our tickets, took one look at my choodas and asked, “Oh! Are you on your honeymoon?! Congratulations!” Once we entered Dream World, my husband snickered and said, “I’m sure you like your choodas a whole lot more now, don’t you?!” I smiled but refrained from saying anything, as I knew he was just saying it to make me feel better about the red bangles, which I’d started whining about within 48 hours of placing them on my wrists.

When we stepped in, we felt like we were in a completely different world! THIS was the ultimate theme park, and so what if we didn’t get onto a single roller coaster…

We spent our time enjoying slushies…

…and posing funny for the camera!

Holding up a tiger!

…and of course, eating lots of Candy!

We also saw the tiger show, which was AWESOME.

I did notice how the crowd was so different from what we see here in India. Don’t get me wrong. While I do love my country, I really wish people were as courteous and disciplined as they are abroad. During the show, I expected there to be some pushing and pulling, but everyone arranged themselves neatly before the show began and nobody came in the way of anyone else. They basically did not assume that their life, time or view is more important than yours, and therefore everyone got to enjoy the show equally nicely. How I wish I live to see the day when India also sees this kind of mass courteous behavior.

We’d planned our trip in a way so that we got the second half of the day “at leisure” and ended up getting dropped off at Surfer’s Paradise.

Surfer’s Paradise is the heart of Gold Coast. It’s got the beach, and the shopping district, which also houses plenty of good places to eat at. Basically, it’s got everything.

First thing we did was head into Hungry Jack’s (which is like the McDonald’s of Australia) and while my husband enjoyed his burger (he said it was as good as a McD’s), I was left wanting for more. You see, the taste of Australian chicken was not going down so well with my taste buds. I even had to leave the chicken sausages on my plate during breakfast that morning (even though they are SUCH an important side-dish with pancakes!) but as I was beginning to understand, maybe Australian chicken was just not for me.

We then began the short walk towards the beach, which looked absolutely stunning, even from a distance. Exactly the way I had dreamed it to be – pristine sands, blue skies. Ah, was this the perfect honeymoon spot or what?!

I was ready with the right gear – a waterproof tote stuffed with waterproof sunscreen, towels and swimsuits! – that we had been tagging along with us since morning. I had planned our entire honeymoon around this one thing – the beach! I am a total beach bum and can just sit around taking in the view and splashing in the water. I love, love, LOVE beach holidays!

When we got close to the water, I made my husband stand next to me to click the customary beach pic – 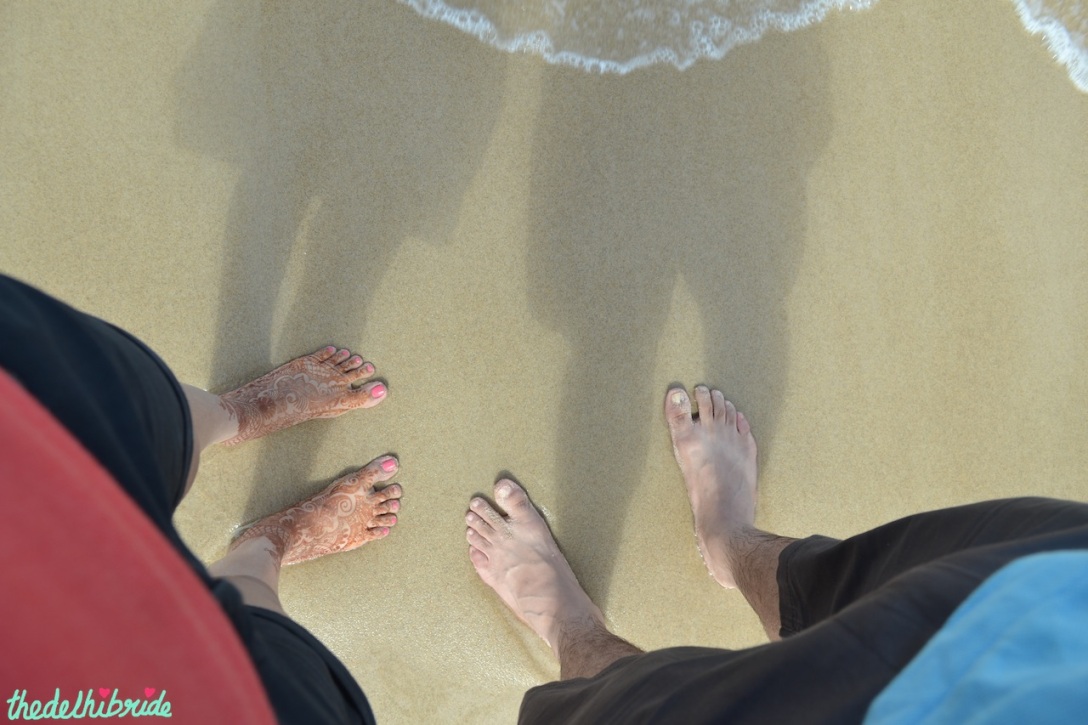 A couple of miliseconds later, the water came rushing over our feet, and it felt…

Freezing, damn it! The water was freezing cold! HOW were all these people IN the water? I knew we were in Australia just at the beginning of summer, and there had been signs I had ignored – the cold wind outdoors last night, the cold wind blowing at the beach right now. But this was a complete catastrophe! How could we get into the water, when it was this cold?

Accepting defeat pretty quickly, my husband and I headed back to the market place for some window shopping. There were a lot of nice shops, and a lot of them were quite expensive.

I did find an absolutely beautiful pair of Adidas sneakers I got my heart set on, but they were far too expensive.

We headed off to the hotel in a bus, and hit the bed for a nap almost immediately. Unfortunately, that totally screwed up our body clocks and we woke up at 10 PM to realize we’d missed a whole evening! We swore not to nap on any other evening as we feared spending half the trip just sleeping off. (But we did just that the next day)

Day 3 in Australia was pretty similar to Day 2. We went off to Movie World, and realized rather last-moment that we (read: I) was looking forward to visiting Sea World the most but our travel agent hadn’t booked us tickets for that! I got over it pretty quickly, as we figured we’d manage to catch dolphins and penguins elsewhere. (We did not)

I’m a big fan of super hero, comic-based and action movies, so I had a great time at Movie World.

Did not get onto a single roller coaster…

But we did pose for some more funny shots…

We were back to the hotel by 4 pm, and clicked a few shots of where we stayed.

And…we spent the rest of the evening sleeping. Oops! Woke up at 11 PM and realized – damn it! Yet another evening lost to sleep! And that too – our last evening in Gold Coast! Well, we just made do with another midnight snack, some TV and went right back off to sleep 🙂

We left Gold Coast early the next morning. The hotel gave us a cute breakfast in a box to eat on our way!

For the rest of the stories from my wedding (Pre-Wedding Shoot, Sangeet, Wedding Reception, etc), go to thedelhibells series.