With the Sagan ceremony and ring exchange done, it was time to dance. And so began my favourite event of all – the Sangeet! 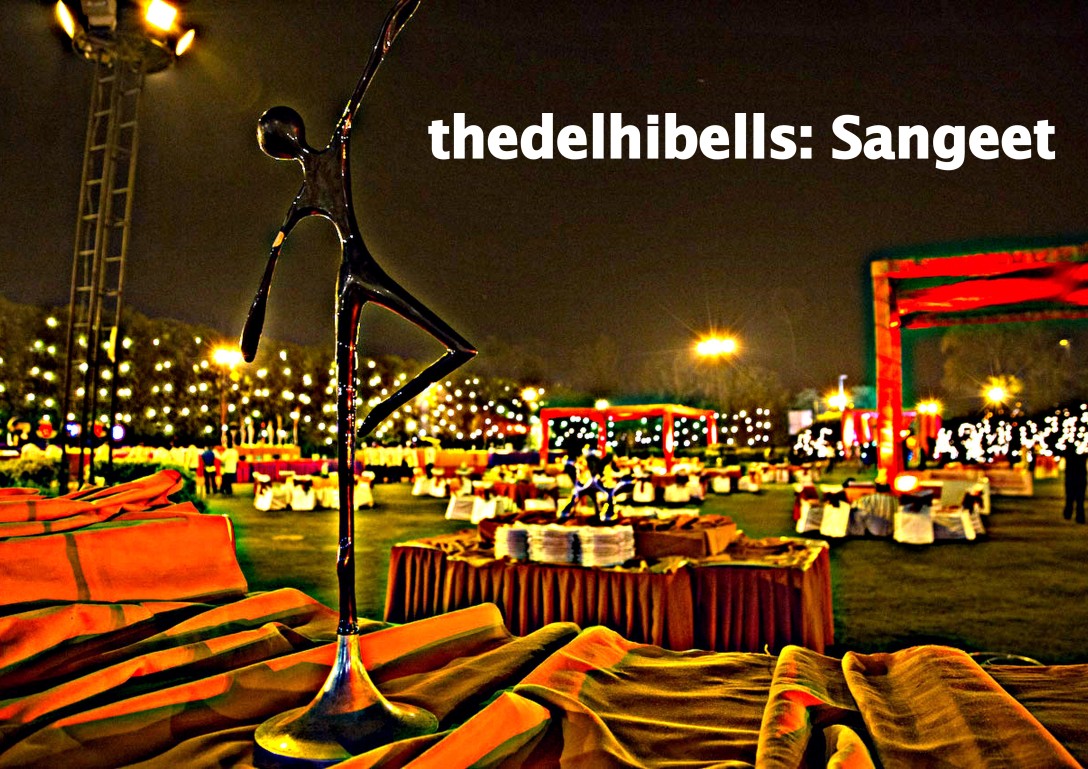 The flow of events had been pre-decided. Our sisters were comperes for the night. They’d start off with their solo dance numbers, followed by dance performances by family and friends. The last dance was a group dance – on Chammak Challo – that had been taught to anyone and everyone who was willing to get onto the stage (including those who were last-minute additions because they were flying into Delhi either on the day, or the day before, the Sangeet). Post that, we’d invite everyone onto the dance floor where the DJ would keep the music going as long as people were willing to stay on their feet.

So I’m sitting with my groom on this sofa smack in front of centre stage – best seats in the house, basically. The groom’s sister comes onto the stage, and music starts playing in the background. NOT the song that she’s supposed to dance on. And then, she starts to sing! She has a beautiful voice, and I begin to feel really happy at this sweet surprise…but it gets better. I realize she’s singing one of our favourite songs – A Thousand Years by Christina Perri. Boom. I’m bedazzled. And speechless. I just sit there, mesmerized by her voice, and I can’t believe I get to hear this song at this moment, on this day. It’s just…so much more than perfect.

Once the song is over, my sister gets onto the stage. I’m waiting to hear the sounds of “Radha on the dance floor, Radha likes to party…” but what do I get instead? Another surprise! My sister is on stage, mic in hand, speaking to an audience of atleast 300 people, and she starts to read pages from my diary. A sense of dread fills me up. What is she doing??? She’s reading the part where I had written about my first encounters with the groom. I was, let’s say, very childish back then and since I’ve always been a writer, the writing is dramatic. And dramatic to a 16-year-old is the equivalent of super-duper-cheesy to anyone over the age of 20! I’m hoping that she’s edited out a few over-dramatic lines from those pages. But when she comments on how bad my handwriting is (she’s struggling to decipher the words), I realize she’s photocopied the whole damn thing! Oh. My. God! I just wanted the Earth beneath me to split open and for me to fall into a bottomless pit. Unfortunately, this is not just a nightmare. It’s true, it’s happening, and soon – it’s happened. I don’t think I’ve ever been this embarrassed my whole life. Of course, I want to murder my sister. But then I wisely realize, who will host the Sangeet? So I control my urges, and let it go, if only for a little while.

Finally, things begin to unfold as they were originally planned. Dance after dance, all our practices and hard work pays off. Of course, everyone forgets a step or two, but that doesn’t come in the way of a successful show. The parents dance is a big hit – considering we made 8 adults over the age of 50 dance for a full 120 seconds with perfect coordination. Come to think of it – they were the only people who didn’t forget a single step in their performance!

And another song that needs a special mention is my friends’ performance on Gangnam Style. Back in September 2012, it wasn’t the rage it is today at every Indian wedding. But on this day, my friends nail it in song choice and their super cool moves!

The groom and I danced on plenty of songs ourselves! Just the two of us on Ek Main Aur Ek Tu and Aashiyan, and on Desi Girl, Tum Hi Ho Bandhu and Disco Deewane with the cousins.

The last song – Chammak Challo – is about to begin. Already? How did we get here so quickly? This is THE most uncoordinated dance number of all. But it’s also the most fun. It saw friends and family from both the bride and groom’s side come onto the stage, and to my mother (who was in the audience for this song) it signified the union of the two families.

I get off the stage, and my school friends come up to me to chat. I haven’t had a chance to speak with them since the ceremonies began, and they want to say hello! Suddenly, I feel a hand tugging at my arm. It’s my cousin brother and he’s asking me to go back to the sofa where I was sitting. I think to myself, “oh, maybe that’s where people will be expecting the bride and the groom to be, so I should probably get back to it.” I wave a hasty goodbye to my friends, and follow my brother. He keeps asking me about the groom’s whereabouts, but I’m clueless. I’m looking around for him, when I spot him with his college friends on the other corner of the stage. I turn back to tell my cousin his location, when all of a sudden music comes on. It’s my current Bollywood favourite – Aunty Ji! And to my utter and complete surprise – my brother starts dancing to it, right in the middle of the open field! And he’s really, really getting into it full on! Since I love the song so much, I try to join in with some bride-appropriate subtle dancing. The next second, 2 of my sisters join in, and then 2 more sisters, and then suddenly there’s a full gang of people dancing a choreographed dance on Aunty Ji! It was a damn FLASH MOB! In the middle of my Sangeet! But, but, but…I was SO in shock, I just didn’t get it. I stood there with a “What the hell is happening?” look on my face, intermittently joining them in the dance. I thought I finally got it when they pointed to me and screamed “Aunty Ji!” but when I look at the sangeet video now, you can hear me asking my sister “What’s happening???” even after the chorus of the song is over! Haha! So even though I managed to make a fool out of myself once again, it was THE BEST SURPRISE EVER. Also, the SWEETEST. It just goes to show, although most of you would beg to differ, that I have the best family and friends in the whole wide world 🙂

What surprised me the most later on was that they managed to keep all these surprises a secret. Usually, I am super duper awesome at figuring out surprises. I just…know. But this time, I was completely clueless. Good job, sisters!

While Aunty Ji is still playing in the background, my sister drags me to the dance floor and we’re followed by all of our family and friends. There are so many people on the dance floor the whole night, that the dance floor size seems too small! Later on, my mother informed me that she’d told the DJ to give us the biggest dance floor he possible could, and he did. My mother insisted he make it even bigger, even if it meant outsourcing from elsewhere, but he kept insisting “you won’t need a bigger dance floor!” Unfortunately, we DID need a bigger one! But as a result, people were dancing all over the farmhouse. You’d see a couple of ladies sitting on chairs quietly eating their food, and suddenly their husbands would fall to their knees on the grass and start a dance! Eventually, there were mini-dance floors all over the farmhouse, and the DJ dance floor remained full right up until the end. 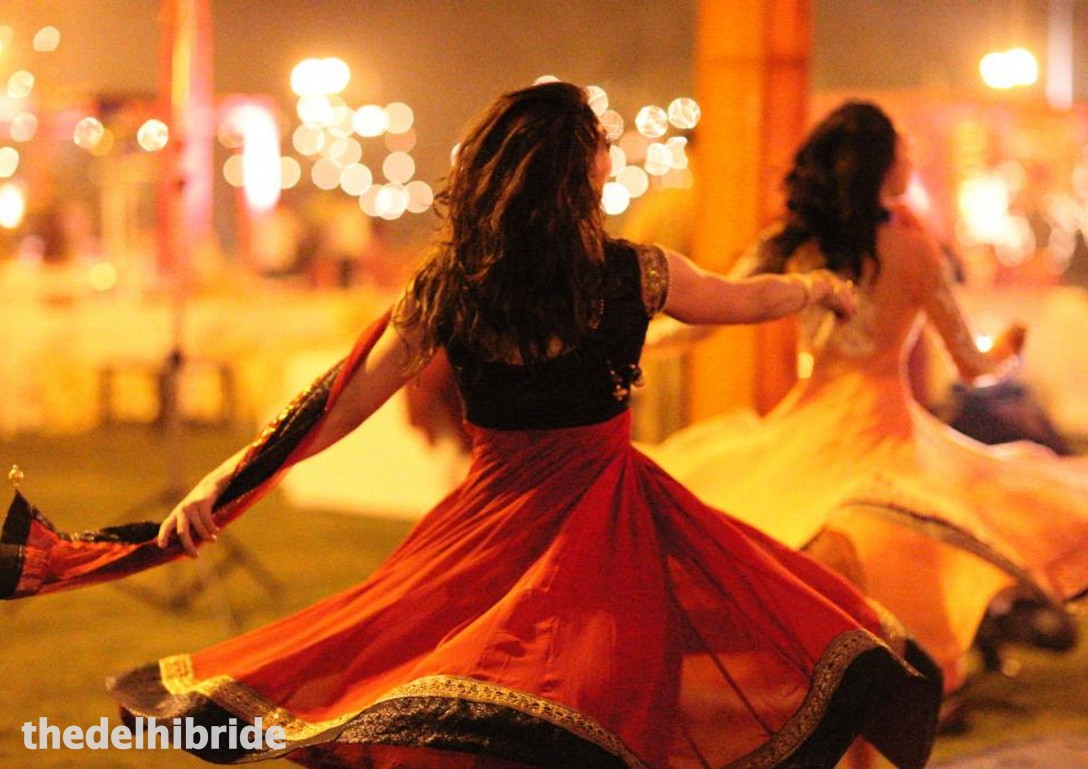 What was yours truly doing all this while? Well, dancing, of course! I danced the night away. I was on such a high. I didn’t leave the dance floor the whole time. People kept calling the groom and I off the floor, to meet guests. But we’d just drag them back onto the dance floor, irrespective of whether they wanted to or not! Finally, the DJ announced the words I didn’t want to hear “This is the last number of the night.” I danced my heart out on that last number, but I was still not done. I wanted more! I had all this pent up energy, I could have danced for another 2 hours! My sister could see it on my face, so guess what she did – she asked one of her friends to start singing. And then all her friends, and my friends, and the groom’s friends joined in. We danced on atleast 6-7 more songs like this. No music, just voices of youth – didn’t matter if you were in tune! We danced to our own tunes that night, literally. And it made for a really, really memorable end to a fantastic night under the stars. 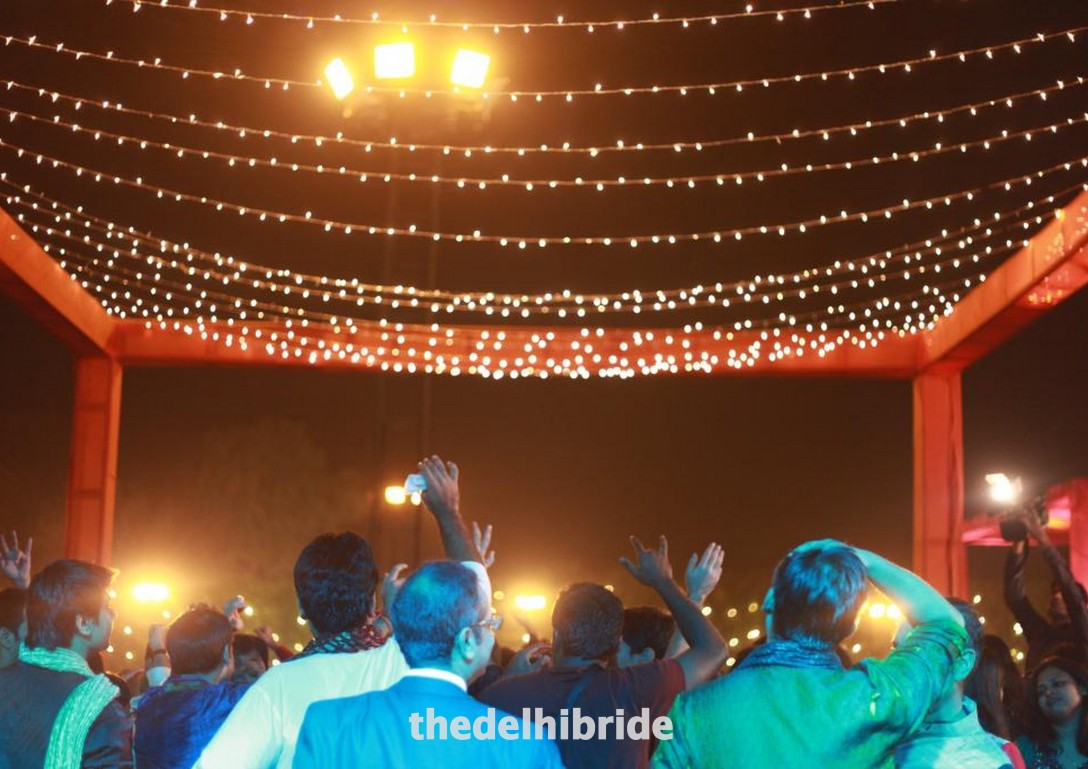 Thank you Dad, because I know NONE of this would have been possible without you.

PS. There are a million more people to thank, who should be thanked in equal amounts if not more than this, but this place on this post of the blog belongs to Dad. Many more thank you’s, coming up 🙂

You can read the whole thedelhibells series here: